Someone asked me to explain all the files. Let’s try to do that. Look at the most complicated one.

The .tmx files are from tiled map editor. Tiled uses the Metatiles.png and Sprites.png files to as its tileset, and the exported tilemaps are the .csv files. You can’t import a csv into a c project, so I wrote some python scripts to convert .csv files into .c files. Two different python files, one for background and one for sprites, so all the .c files with “SP” are sprite object lists.

All the .c files are included into the project.

The .nes file is our game that can be run in an emulator.

The .s file is the assembly generated by the cc65 compiler, just in case you want to debug by looking though the ASM.

The labels.txt file is a list of all the addresses of every label in the code. You can also use this for debugging, by setting breakpoints for these addresses.

famitone2.s is the famitone code (again, Shiru’s website). All the .s files are included somewhere in crt0.s. If we had DPCM samples, they would also be included in crt0.s in the “SAMPLES” segment.

The .nss files are NES Screen Tool 2.3 files. I saved one (title) as a .h compressed RLE, which the game includes and decompresses. I made a .nss file with all the kinds of block in the game (metatiles), and save to .nam (uncompressed list of the entire screen), which meta.py python script converted into a C array in metatiles.txt. Also I did a print screen from both the metatile.nss and sprite.nss files and cropped down in GIMP and save those as the .png files up in the BG/ folder (used by tiled map editor).

The other files are…

Sprites.h – arrays of all the metasprite definitions, generated by NES Screen Tool (or by hand, which is sometimes faster)

compile.bat – to recompile the project (on Windows)

crt0.s – is all the startup code, but also a convenient place to include asm or binary files.

full_game.c – the game code. I like to use notepad++ to write my code.

full_game.h – variables and constants and prototypes, and some constant arrays

level_data.c – lists of game data and things included for each level

nrom_32k_vert.cfg – the linker file for ld65, tells where each segment goes in the final binary.

screenshot26.png – just a picture of the game.

And some more info on compile.bat

This is a list of command line inputs for compiling the game from scratch. If you change the name of your project, change set name=“full_game” to match the main code filename. Or you can change this line

where filename is the name of the .c file. You can process multiple C files this way, just make sure to also use ca65 to convert each .s file into a .o object file.

–add-source tells it to put the source code in comments in the asm file.

If you have multiple object files you need to change the linker (ld65) line to list every .o file.

-o blah tell it what to name the output file.

If you use cl65 instead of cc65/ca65/ld65, then make sure to set target = NES. It sets a strange default target, which does not use standard ASCII encoding.

moves these files into the BUILD folder

just runs the game, which is in the BUILD folder. 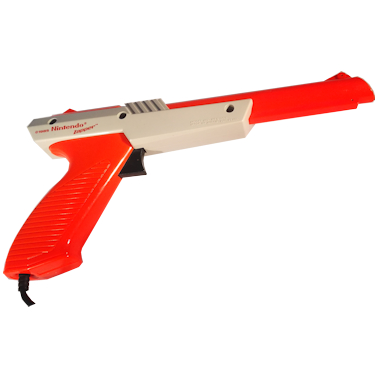 The zapper gun came with many NES consoles. They are pretty common, but you need a CRT TV for them to work. You can also play on most emulators using the mouse to click on the screen (make sure you set the 2nd player input to “zapper”).

It is possible to play a modified game on an non-CRT TV using a Tommee brand Zapp Gun. You would need to add a 3-4 frame delay in the code, since LCD screens typically have 3-4 frames of lag. You couldn’t play the standard Duck Hunt, but some people have been working on modifying zapper games to have a delay before reading the zapper.

Ok, so we’ve all seen Duck Hunt. Do you know how it works? 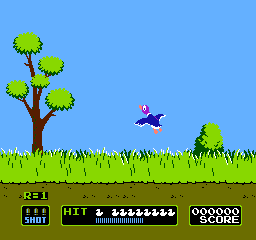 The game reads the 2nd player port until it gets a signal that the trigger has been pulled. Once that happens, it blacks out the background and replaces 1 object per frame with a big white blob. If there are 2 objects on screen, it will display the first object on 1 frame and the other object on the next frame… to tell which object you hit (if any).

Duck Hunt uses 32×32 pixel box for standard ducks (4 sprites by 4 sprites). Which is about the size you want for a medium level difficulty. Other games had much bigger things to shoot and much bigger white boxes. To vary the difficulty, they would then change the amount of time that the target was on screen.

I had to write a different controller reading routine, due to the zapper using completely different pins than the standard controllers. I threw in this zaplib.s and zablib.h files.

I also checked to make sure the last frame didn’t also have trigger pulled.

zapper_ready is just the opposite of the last frame. That’s a bitwise XOR, if you’re not familiar with the caret operator “^”.

Then immediately, I turn the BG back on, ppu_mask(0x1e); so the flicker is minimized.

which is a loop that waits till it either gets a signal that the gun sees white, or that the end of the frame has been reached. It returns 0 for fail and 1 for success.

If you want the game to run on a Famicom, you should put the zapper reads on port 2. The zapper will have to be plugged into the expansion port which is read from port 2.

The Power Pad is a little less standard. There weren’t many games that used it. Just like the zapper, the Power Pad uses different pins than the standard controller, so I had to rewrite the code that reads the input. See padlib.s and padlib.h.

And, it returns a 2 byte value (unsigned int). And I made these contants to represent each foot pad.

If you want the game to run on a Famicom, you should put the power pad reads on port 2. The power pad will have to be plugged into the expansion port which is read from port 2.