Even if you have no music talent, you might be able to make some cool sound effects. Music is nice, but sound effects make if feel like a real game.

Again, open famitracker. You can use mostly all the fx and any notes. Put all the sound effects in 1 file, each as its own “song”. Add a song in module properties… 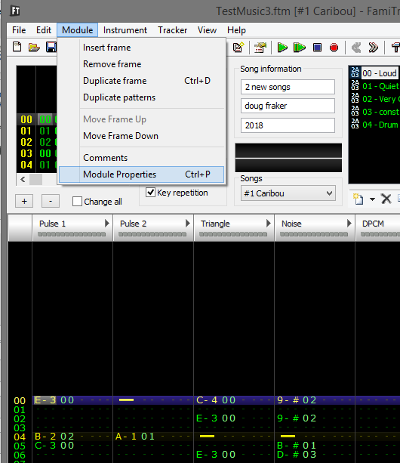 They should be rather short. End every effect with C00, and put the C00 on its own line.

Save. Now, export to NSF file. 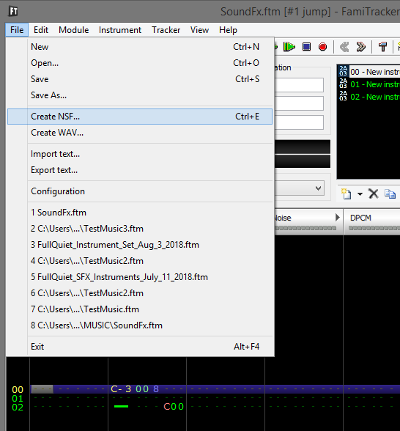 Open the command prompt and use nsf2data with the -ca65 option. I’m using famitone 2 v1.15. The sound effect code changed in the last update, so use 1.15 to make the data.

Include the sounds data in crt0.s under sounds_data:, and make sure FT_SFX_ENABLE is set at the top, and also that FT_SFX_STREAMS is 1. The init code will initialize our sound effects. Having 1 stream means that only 1 sfx can play at once.

We just need to call the sound effects like…
sfx_play(sfx,channel). Channel means stream, use channel = 0, since we have only 1 activated.

If you want 2-4 streams defined, you could set a channel to 1,2,3. Higher having higher priority. I would caution against having too many, they might conflict. I have used 2 before.

I made it so that jump calls sfx_play(SFX_JUMP, 0). B button plays a noise sfx, and Select button plays a “ding” sfx. I’m going to use that for coin collecting, later.